This project, completed at Golden Flight, is entered under the category of "Do you think because you are virtuous, that there shall be no more cakes and ale?" (Food and drink your persona would have known.)  Baronessa Isabel Maria has this to say about it:

"It is nice to have food and drink appropriate to ones persona when attending an event.  To that end, I was looking for an easy to make (or perhaps even convenient to buy) drink that it suitable for daytime tourneys, evening feasts or multi-day camping events.  So the question became “what did they drink in sixteenth century Spain?”

According to Daily Life in Spain in the Golden Age (Marcelin Defourneaux) there was “a great demand for iced drinks – orange juice, [and] strawberry water...” even in the summer months.  In contrast he also quotes the Countess d’Aulnoy as saying “women never drink [wine].”  With that in mind, I went looking for a flavoured water or juice recipe in 16th century Spanish cooking manuals or recipe books.  While I did not find such a book from exactly my period, there was one from earlier that met all my requirements.

I used the above translation of the original Catalan recipe and considered the advice of several others who have made this drink, but adjusted the spice proportions to suit my tastes. 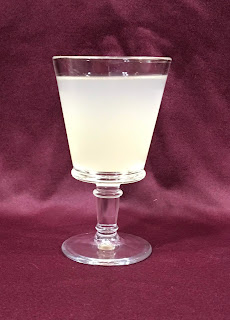 My redaction
Take 2 litres of water and add 170g honey.  Boil for 3 or so minutes and take the scum off the water.  Throw in ¼ teaspoon of roughly broken cloves, ½ teaspoon of roughly bashed cinnamon stick, a tiny fraction of a pinch of ginger.  Let steep until lukewarm, strain through 2 layers of thick linen, bottle and refrigerate.

Due to the honey used, there was a slight chemical aftertaste.  However, the addition of a tablespoon of white sugar eliminated the “tang” without substantially affecting the sweetness of the clary.

Verdict
This proved to be a light and refreshing non-alcoholic beveridge, that was very pleasant to drink when chilled while watching the tourney and room temperature during the feast. It is also fairly quick and easy to make, with ingredients regularly in my pantry, meaning it is the sort of thing that can be made the evening before (or indeed morning of) an event."

Email ThisBlogThis!Share to TwitterShare to FacebookShare to Pinterest
Labels: Do you think because you are virtuous that there shall be no more cakes and ale? PGC2019