A delicious and delightful entry from Dona Isabel Maria - Marchpane! This is for the categories Back To Basics, Show Us Your Arms and Fly The Colours.

I began with a copy of 'The English Hus-wif' by Gervase Markham, a packet of raw almonds, a packet of caster sugar, a bottle of rose water, a mortar and pestle and a quiet evening.  Some time later I had 'searced' (powdered) sugar. Some considerable time after that, I had a lump of raw marchpane, two sore arms and a strong resolve to buy a spice grinder.
I followed the rest of the instructions (kneading, rolling it out, adorning it, washing with rose water etc) but with a few modifications. I ignored the wafers (not having any) and decided to have a go colouring the 'ice' (icing) using plausibly period ingredients. The red was colour was created with a couple of drops of beetroot juice in some powdered sugar and rose water, while the green came from boiling up some rosemary and parsley from my garden. The decorated marchpanes were then baked in a relatively cool oven until they were just beginning to colour.
However, the colours did not really develop as I had hoped, so I applied additional coats. I tested the differences between baking it before icing it, and icing the raw marchpane, as well as the difference between letting it dry between coats and baking it between coats to see if there was any appreciable difference I could use in future experiments.
Taste: the finished items were taken to a household sewing day, to add to the lunch table. The general consensus was that the marchpane was tasty, even for those people who actively avoid modern marzipan. I personally found it fairly irresistible and hope to experiment further in the future. 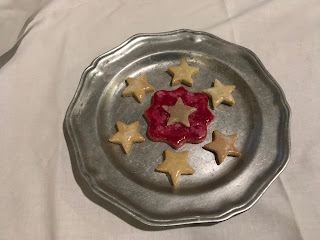 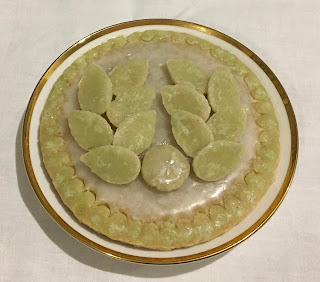 Email ThisBlogThis!Share to TwitterShare to FacebookShare to Pinterest
Labels: Back To Basics VPC2017, Fly The Colours VPC2017, Show Us Your Arms VPC2017, Variety Pentathlon Challenge 2017